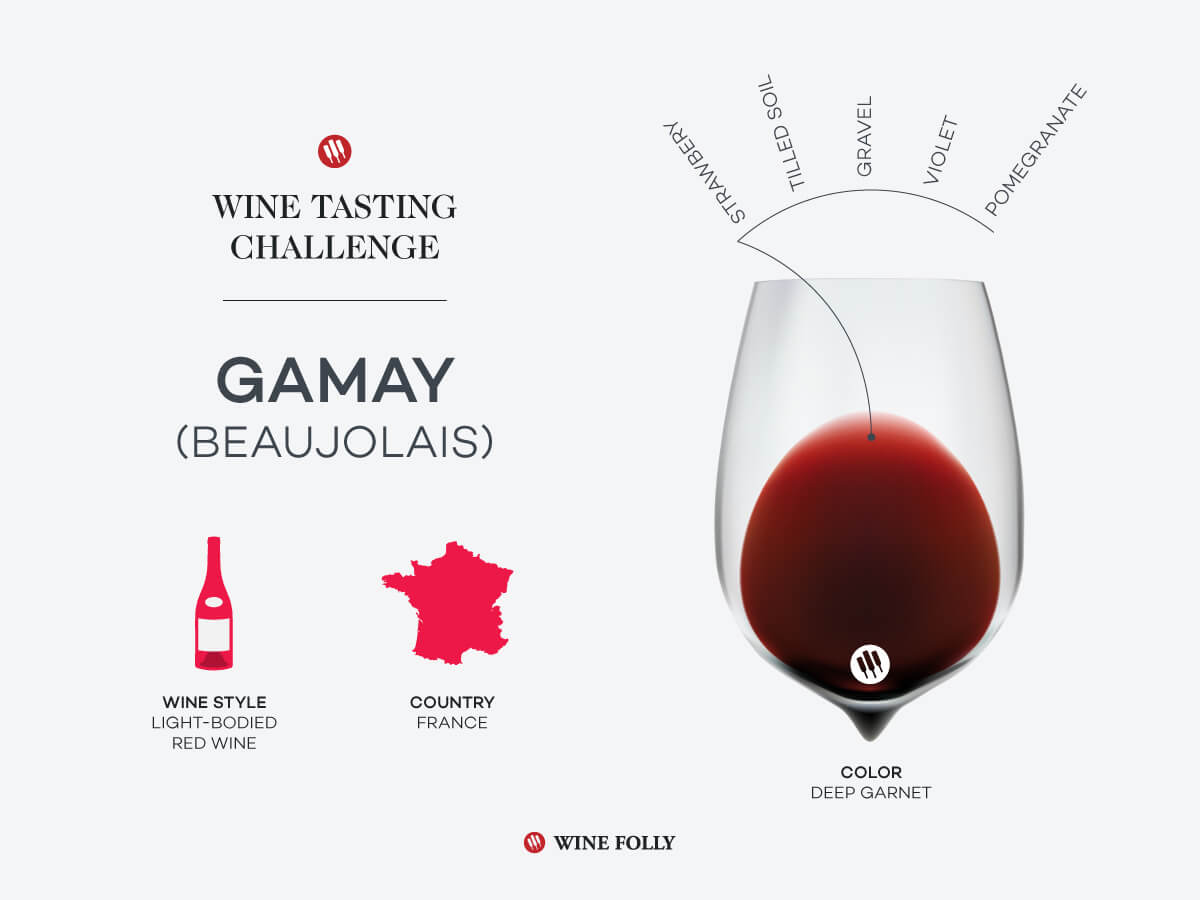 Challenge your palate this week with France’s best-known Gamay-based wine: Beaujolais. You’ll learn that even the highest quality wine of a region can balance complexity with accessibility and fun.

Potting soil might seem like an odd thing to appreciate in your wine glass, but for anyone who has dug up their back garden on a mild summer day and fallen in love with the fresh, earthy aroma filling your senses, this wine is for you.

To get a real sense of the quality and character of French Gamay, we chose a Cru from Chiroubles, where some of the best Beaujolais in the country is made.

Look: Deep Garnet. Side Note: garnet is an odd color for Beaujolais which could suggest oxidation (they’re usually a more ruby-purple color), but the wine tasted okay, so we rolled with it!

On The Palate: Very similar to the nose, with a big helping of red fruit and potting soil. It was like eating a fruit tree from the top down: first, lots of fruit, then onward to some herbaceousness, and finally a slightly dirty soil quality.

Food Pairing: Would go really well with some sweet, tangy BBQ wings. Salmon (depending on the sauce it’s served with), and darker fowl like roasted duck.

What We Learned About Beaujolais

Directly south of their more famous cousin, the Beaujolais region is an extension of Burgundy.

Like all of France’s most well-respected wine regions, Beaujolais is divided into classes of quality. However, unlike many of those regions, even the best Beaujolais is affordable if you know what to look for.

Given that your goal is to keep price tags under $30, you can imagine how exciting it is to try the highest quality of a region for $25. And it did not disappoint.

It’s nice to try the best that a region has to offer without feeling like the industry has swindled you. There’s something about the bright, fruity character of Beaujolais that inspires you to eat, drink, and be merry. But this particular bottle offered a great chance to see how much complexity it can possess.

Did you try a different wine? Leave your notes below or post on social media with #34Wines34Weeks for a chance to get featured.

Have you ever wondered what fresh earth in your face actually smells like? Are there other aromas you’re trying to figure out? Check out our Wine Aroma Charts and give names to those elusive scents!